The Warren Buffett Approach to Currencies 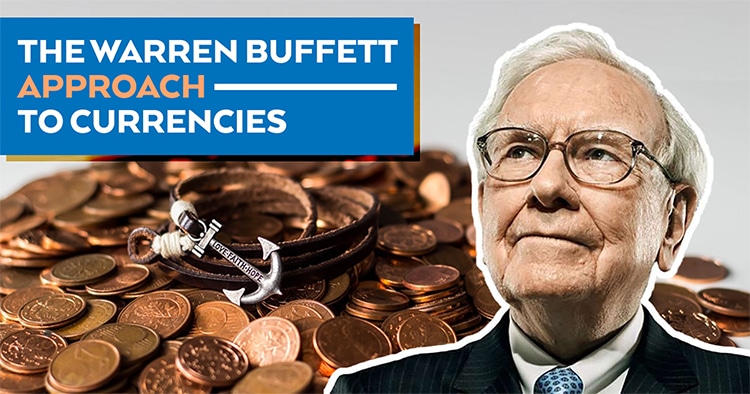 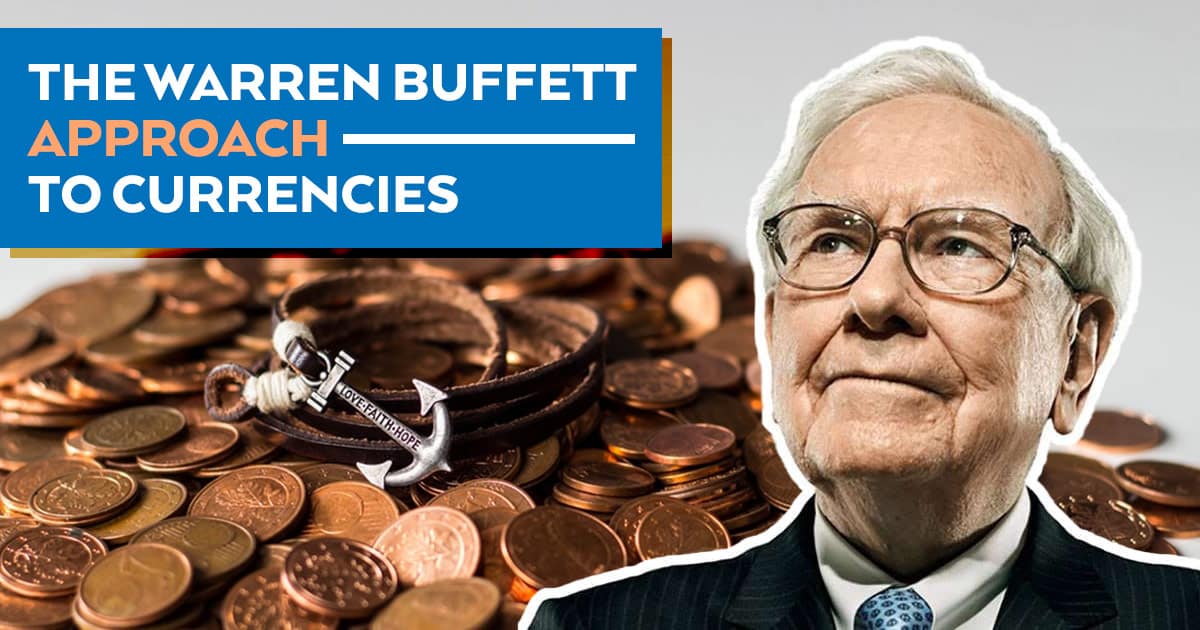 Warren Buffett doesn't need an introduction to the investment world. But he’s not normally thought of much in the world of FOREX trading. After all, Buffett and his irascible partner, Charlie Munger, are not active traders.

Instead, they built their fortunes, and those of thousands of others, primarily through the judicious acquisition of stocks and entire companies. Some traders measure holding time in minutes, Buffett frequently holds his positions for decades.

Let’s be honest, Buffett is likely to advise most individual investors against attempting to speculate currencies or commodities directly. His preference is for the long-term ownership of productive assets. That is, assets that produce a dividend, interest, or quietly amass profits and grow without intervention.

There are limitations to the usefulness of the application of Warren Buffett's philosophical and historic approach to long-term investing and applying it to short and medium-term currency speculators. Dig a little deeper into Buffett’s company, Berkshire Hathaway. Learn how it is structured and how it has been historically managed. We can see those wise currency investors and Mr. Buffett does indeed share some common ground:

Because short-term movements in currencies can be so small, currency traders frequently apply large amounts of leverage to magnify profits (and, alas, losses!). While Buffett himself has a reputation as a conservative investor (he is not. He can be quite bold. But he is conservative with valuations), Buffett can and does frequently employ leverage to boost returns, enable acquisitions and conserve cash.

A recent study of the Berkshire Hathaway portfolio going back to 1976 indicates that Buffett was usually substantially leveraged – by about 1.6 to one. Furthermore, this leverage goes a long way to explaining Berkshire Hathaway’s excess growth relative to the S&P 500.

Buffett’s leveraging strategy was all the more effective because his carrying costs were so low. Between 1989 and 2010, Berkshire Hathaway boasted an AAA credit rating. BRK eventually lost its AAA rating from Standard and Poor’s when it borrowed $8 billion to finance the acquisition of Burlington Northern Santa Fe Railroad during the depths of the recession when railroad and other transportation companies were experiencing a collapse in revenues. Berkshire Hathaway had the cash and access to more cash to keep the railroad going through the crash.

But that’s something that Buffett and currency traders have in common: The willingness to be bold and borrow when the opportunity presents itself to do so at an advantage.
That said, currency investors should not look to Buffett to justify an unhealthy amount of leverage, which makes it all too easy for novice or careless investors to make bets they simply cannot afford to lose.

From the Berkshire Hathaway “Owner’s Manual:”
We use debt sparingly and, when we do borrow, we attempt to structure our loans on a long-term fixed-rate basis. We will reject interesting opportunities rather than over-leverage our balance sheet. This conservatism has penalized our results but it is the only behavior that leaves us comfortable, considering our fiduciary obligations to policyholders, lenders and the many equity holders who have committed unusually large portions of their net worth to our care. (As one of the Indianapolis “500” winners said: “To finish first, you must first finish.”)

The financial calculus that Charlie and I employ would never permit our trading a good night’s sleep for a shot at a few extra percentage points of return. I’ve never believed in risking what my family and friends have and need in order to pursue what they don’t have and don’t need.

Warren Buffett and the focus on management

In Warren Buffett's companies, he does not normally like to replace a management team with his own when purchased. His purchases are usually predicated on the existing management team staying in place, as much as possible and for as long as possible.

Once he makes an acquisition, Buffett does not normally attempt to micromanage the leaders of Berkshire Hathaway’s individual business units. After all, in theory, they know their businesses better than Buffett does, and they are the people that created these successful enterprises in the first place.
“We don’t tell Burlington Northern what safety procedures to put in or AmEx who they should lend to,” he said at his annual meeting two years ago. “When we own stock, we are not there to try and change people.”

“If I thought they needed me, I wouldn’t have bought the stock,” Buffett once quipped when asked why he didn’t intervene in a troubled subsidiary.
When Buffett buys a company – or a fraction of a company as represented in a share of stock, he looks for a stable management team with a reputation for integrity.
This is important in the currency world as well: In a recent interview on CNBC, a viewer wrote in with a currency question for Buffett: If you had to exchange all your dollars for another currency immediately, what would it be?”

Warren’s answer, “Maybe the Swiss franc,” isn’t as interesting as his thought process:

“The future of a currency is a product of governmental action,” Buffett said.

“The real question is how disciplined governments will be over a period of time. Our government has been pretty darned good. All currencies depreciate over time, and the question is, where are they going to depreciate the least?”

So the future of a currency, relative to other currencies, comes down to a question of management: Does the government and central banking or monetary authority of a currency-issuing country have the credibility, discipline, and foresight to pursue a generally sound currency policy? Are they willing to pay the price of lower exports and higher unemployment (at least in the short-term) that a strong currency policy carries with it? Are advocates of these policies capable of winning elections or retaining power?

Some countries seem to be more inclined to succumb to populist impulses at the expense of owners of financial assets than others. While all paper currencies seem to depreciate against tangible assets and gold over time, it's clear that some currencies face greater headwinds than others. We also have training on Japanese Candlesticks and How to use them.

Neither Buffett nor Berkshire Hathaway did any foreign currency investing at all for many years – other than owning companies like Coca Cola which earned money in many different currencies all over the world. There is a natural internal hedging that occurs just from owning a portfolio of businesses with global operations. Buffett likes handling currency hedging in this fashion because there are no costs to hedging in this way.

Buffett himself is cagey about currency plays in general. In a recent interview, he told a CNBC journalist that if he added up all the costs and benefits of hedging that he would have been exposed to over a 50-year career, and netted them all out, they would have cost him money.

But Buffett isn’t above making a currency move under certain circumstances. For example, in 2002, worried about a stubborn trade deficit that threatened to drag the dollar down against other currencies, Buffett steered his portfolio into FOREX for the first time, buying foreign exchanged contracts to hedge against a rapidly fading dollar. Berkshire Hathaway ended 2004 with some $21.4 billion in foreign exchange contracts.

As of year-end 2012 – the last published annual report, Berkshire Hathaway’s total exposure to foreign currency contracts was negligible, with liabilities reduced to a maximum of $2 million, compared to $156 million in liabilities the year before. Berkshire had maintained a series of long positions in several currencies against the dollar but has all but wound those positions down over the last couple of years. There will be a few contracts on the books that can’t be unilaterally closed until 2018 or 2026, however.

Note that Buffett and Berkshire Hathaway eschew derivatives deals that require them to post substantial collateral. “Markets can behave in extraordinary ways,” writes Buffett in his 2012 letter to shareholders.  “We have no interest in exposing Berkshire to some out-of-the-blue event in the financial world that might require our posting mountains of cash on a moment’s notice.”

This last point comes from the financial world’s traumatic experience with the collapse of Long-Term Capital Management – a giant hedge fund put together by two Nobel laureates, Robert Merton and Myron Scholes – yes, that Myron Scholes, along with John Meriwether, the highly-regarded former head of fixed income trading at Salomon Brothers.

The fund was designed to take advantage of very small discrepancies in pricing between two different markets, shorting on-the-run treasuries while going long on off-the-run Treasuries. They were the same security, but because the off-the-run bonds were less liquid, the theory went that LTCM could take advantage of the difference in liquidity premiums between the two markets as prices inevitably converged. Since the movements were small, LTCM borrowed huge amounts of money to leverage its bets.

When early trades went well, the fund attracted more and more capital. And the founders were driven further and further afield from treasuries and into equities. And its bets were absolutely right, but the timing in the summer of 1998 was absolutely wrong.

What happened was something no one could have predicted with any specificity: Russia imposed a moratorium on ruble-denominated debt, which caused a massive flight to safety. Instead of converging, the spreads between on-the-run and off-the-run treasuries actually widened – forcing LTCM’s creditors to press LTCM to put up cash to cover their margin.
LTCM didn’t have it – and couldn’t raise it.

In the end, the losses at LTCM threatened to take down a number of its creditors with it, and the resulting loss of confidence in counterparties threatened to shake the financial world to its core. A Berkeley study lays out the problems, here.

The Federal Reserve had to step in – and quietly approached a consortium of investors with deep pockets who were in a position to make a bid on the ruins of the company. Buffett and Berkshire Hathaway were one of the consortium approached. Meriwether had been an associate of Buffett, who himself ran Salomon Brothers for a time in the early 1990s.

The lessons of LTCM should be seared into the consciousness of any FOREX investor. Meriwether and the other founders of LTCM were correct in the long run: Spreads eventually narrowed, and their original investment thesis was correct: Prices at on-the-run and off-the-run markets did eventually converge. But because of the crazy leverage levels and overconfidence, the markets stayed irrational faster than some of the most renowned financiers in the history of capitalism could stay solvent.

The Takeaways for Forex Traders

There you have it, even though Warren Buffett isn't active in currencies, we as forex traders can take quite a bit from his methodologies in business and investing.

You can also read about these Gold Trading Tips.

Please leave a comment below if you have any questions about The Warren Buffett Approach! 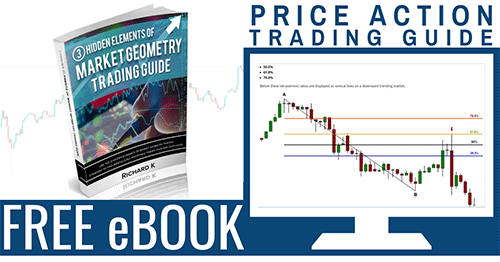